The Best Antivirus Options for Mac

A 744% increase in malware attacks

For years Mac users enjoyed a relatively virus and malware-free experience. While macOS does enjoy certain security advantages over Windows, thanks to its UNIX underpinnings, at least some of the security Mac users have enjoyed is “security through obscurity.”

In other words, because of the Mac’s relatively small market share, it simply wasn’t worth it for malware creators to target the Mac platform, especially when compared to the larger, more lucrative Windows market.

In recent times, however, the Mac’s rising market share has made it a more appealing target for hackers and malware authors. In fact, there was a reported 744% increase in macOS malware in 2016 alone, according to McAfee Labs Threat Report.

If you’re a long-time Mac user, or just switching to the platform for the first time, finding a good antivirus package is more important than ever. Let’s take a look at some of the top options available. 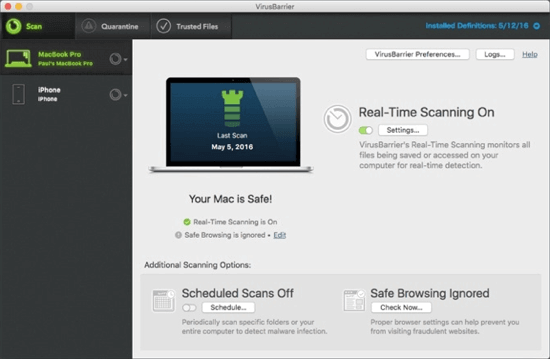 VirusBarrier and its predecessors have been a long-time staple in the Mac market since Intego’s founding in 1997. Through the years, Intego has built a strong following among the Mac community by focusing their attention on Mac users, providing the experience they’ve come to expect.

This is evident in VirusBarrier’s interface, which is clean and straightforward. As an added bonus, for the same price as some other companies’ basic antivirus options, Intego bundles Virus-Barrier with their other security products, including NetBarrier and ContentBarrier, offering advanced firewall and content blocking options.

While VirusBarrier scored well in independent tests for catching macOS viruses and malware, its one weakness is its Mac-only focus. While it captured 99.6% of Mac-based malware, it only captured 35% of Windows malware. For Mac users who rarely share files with Windows users, Vi-rusBarrier is a solid choice.

For users who work in a multi-platform environment, or routinely exchange files with Windows users, VirusBarrier may not be the best option. Even if a Mac is immune to a given Windows malware file, the Mac user can inadvertently forward it to an unsuspecting Windows user.

Norton is probably the most well-known offering in the antivirus field, both on Mac and Windows. For many users, that familiarity alone will make Norton an appealing option. In addition to its familiarity, Norton provides a capable defense against both Mac and Windows malware, thanks to its decades-long, cross-platform heritage.

The one area where Norton falls short, however, is in resting on the success and reputation of its past. The result is a program that, while capable, does not include many of the additional features its competitors offer. It’s also been known to have a measurable impact on system performance. 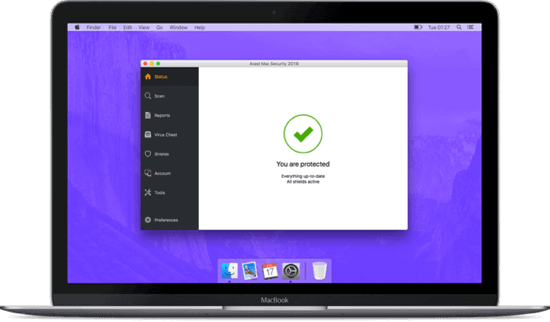 Avast is also known for being light on system resources, especially when operating in the background. In fact, most users will not see any impact on their system’s performance. Best of all, Avast is offered free of charge. 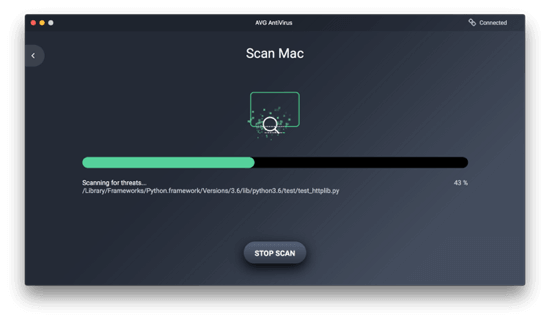 Like Avast, AVG is a popular free solution that will be familiar to many users, especially those switching to the Mac from Windows. AVG touts their triple protection – protecting Mac, Windows and Android devices – to keep you and those you communicate with safe from threats. Like Avast, AVG also scored a 99.9% success rate identifying Mac malware and a 100% success rate identifying Windows threats. 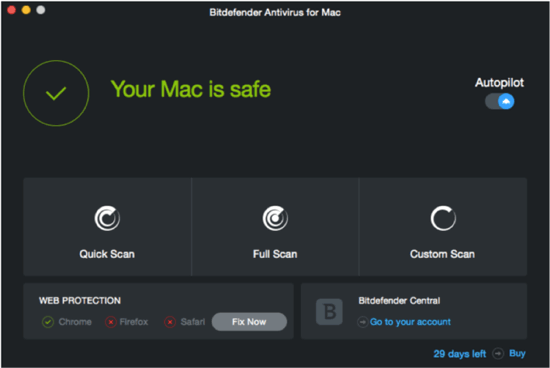 Bitdefender stands out as one of only two packages that score perfection detection rates for both Mac and Windows malware (the other being Kaspersky, but more on that below). In addition to virus protection, using a combination of behavioral pattern recognition and signature-based malware recognition, Bitdefender also helps protect against ransomware, even keeping Time Machine backups safe. The software integrates with Safari to help eliminate adware and website phishing attacks as well.

Bitdefender sports a clean, intuitive interface that makes it easy to use the programs’ various features, while the company touts “zero negative impact on speed.” 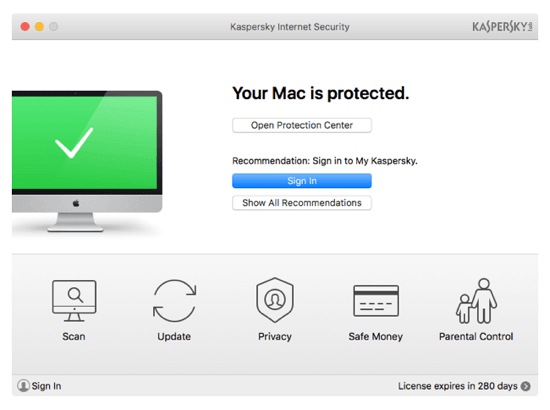 Kaspersky’s antivirus solution has been a well-respected entry for some years now, with Kaspersky Antivirus scoring perfect marks along with Bitdefender. Recent developments, however, have undermined the company’s standing to some degree. In September 2017, the US Government banned the use of Kaspersky products on government machines, citing concerns over the company’s ties with various Russian intelligence officials.

While some experts say home users have nothing to worry about, there are at least some experts who feel that Kaspersky’s products may represent too high a security risk for any user.

From a more practical perspective, some stores such as Best Buy and Office Depot, have stopped selling the company’s products as a result of the controversy. If more stores follow suit, support for Kaspersky may continue to dwindle. Either way, until the current controversy is addressed, it’s hard to recommend the company’s products, regardless of how effective they may be.

There’s never been a better time to find a good antivirus package for the Mac. The field is ripe with strong candidates, both old and new.
If you’re looking for a solid, free option, Avast offers excellent virus protection, while also offering additional protection for Web browsing and emailing.

If you don’t mind paying $29.99 per year to protect three devices, Bitdefender is the current reigning champ. Perfect malware detection—for both Mac and Windows—as well as adware blocking, ransomware protection, sleek interface and excellent performance make this the antivirus solution to beat. What program do you use to protect your Mac? Let us know in the comments. Enjoy!

5 iOS Apps That Are Guaranteed To Improve Your Sleep

How To Fix iPhone Touch Screen Not Working

How To Fix ‘Move To iOS Not Working’