Chaos can ensue in the blink of an eye

Many computer users, after trying out iTunes for the first time, are a bit dismayed to find out the sheer havoc iTunes can play on their music library.  In a bid to be helpful, you see, iTunes has the ability to manage your music library, which keeps the folder structure identical to the metadata inside your music.

In theory this is great, but in practice, a whole lot of chaos can ensue in the blink of an eye.  What happens is that when you open iTunes and point it to your music folder, iTunes quickly scans the metadata inside your MP3 or AAC files (checking for bits of information such as Artist, Album, Song Title, and more).

When it finds a file, for instance, that has “The Beach Boys” as the artist tag, but the folder containing that file is named “Beach Boys,” iTunes will move the file into a new folder so that the tags and folder match.

Again, in practice this is great; however, consider this example: a person purchases a CD, and rips it to MP3.  Later, a deluxe edition of that album, with bonus tracks, is released.  There’s no need to purchase everything again, just the extras, so since iTunes or Amazon has those tracks available individually, the songs are purchased and then placed inside the same folder as the original album.

But since they were tagged differently (the new songs were from the “Deluxe Edition” while the originals were not), iTunes sees the difference and places the new songs where it thinks they belong.

This, for many people, is very bad.  A lot of music lovers spend a great deal of time making sure their music is meticulously organized, and become frustrated when iTunes changes everything without asking, or even notifying the user that changes are being made.  Thankfully, changing this behavior isn’t that difficult.

The first step is to open iTunes.  If it’s installed, the icon is likely in your Dock, so click it. 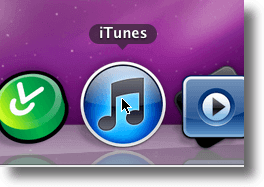 Once iTunes opens, go to the iTunes menu and choose the Preferences option.

After the Preferences window opens, click on the last tab on the right, the Advanced tab.

Note: if you have one of a number of iTunes extensions, installed, they may have placed a preference pane to the right of the Advanced tab.

Once the Advanced tab has loaded, there are two changes we need to make in order to get iTunes to stop “fixing” our music library for us.  The first step is to make sure the checkbox beside “Keep iTunes Media folder organized” is un-ticked.  By default, the box is checked, like this:

The next step is similar to the first, although the result is slightly different and it solves a slightly different problem.  By default, iTunes makes a copy of any music you drag to its library, so all your music is kept in the same place.  If this isn’t what you want – if you want iTunes to leave your music folder completely alone – look to the checkbox (checked by default), beside “Copy files to iTunes Media folder when adding to library).

If you intentionally keep your music library in separate places, then simply uncheck the checkbox, as shown below:

When done, click the blue OK button, and return to listening to music.  From now on, any changes you make from inside iTunes, such as editing artist, album or song data, or adding music to your iTunes library, will not affect the physical files.  If at some point you want to change back to the default behavior, all you need to do is follow the steps again, only checking the checkboxes instead of unchecking them.

5 Ways To Reveal The Path Of a File On MacOS