Where are the Arrow Keys on the iPad Keyboard?

The answer is going to surprise you

Someone asked me the other day where they arrow keys were on the iPad keyboard and I was a little taken aback! Not because of the question, but because I had never thought about the arrow keys! Even though I use the arrow keys constantly on my computer, I have never used them on my iPad and therefore didn’t even know if they existed!

After a minute or two of thinking, I realized that there are no arrow keys on the iPad keyboard and it kind of makes sense. Most of the time that I use the iPad, I simple do everything via tapping. Just about every app is designed to be used via touch and the only time I could think of when it could kind of come in handy was when I was typing an email.

So if you really miss the arrow keys on your iPad, it’s probably because you do a lot of typing, which is just plain hard on a virtual keyboard anyway. On the iPad, I realized that when typing something, if you decide you need to go back to a previous sentence or to some other part of the document, there is a nice trick which makes it super easy. Before I used to try to tap or double tap and even though it would get me to the general area, it was always hard to get the cursor to show up right in the middle of a word, for instance.

But that was before I realized that tapping is not the best way to move the cursor when typing on the iPad. Instead, if you just hold your finger down over the exact location, a bubble will pop up with the text below zoomed in and you can drag your finger left or right to get the cursor to the exact character you want. 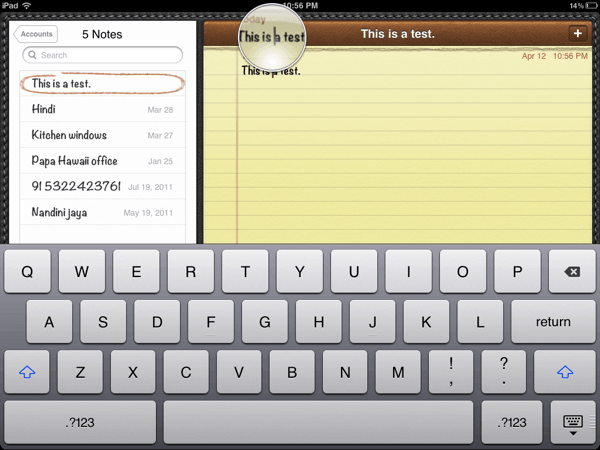 It’s actually a lot easier than if you had to use arrow keys and I’ve gotten quite used to it and now wish I could do the same thing on my computer! If you really need arrow keys for something else altogether, then one other option is a bluetooth keyboard that you can pair with your iPad.

The Apple Wireless Keyboard would be my first choice since it’s sleek and matches all the other Apple hardware.

Another option if you don’t want a keyboard is a small stylus. With a stylus, you can then pinpoint the exact location for the cursor or anything else instead of trying with your giant finger. There are literally too many choices to suggest any here, so your best option it to Google iPad stylus and read some reviews.

Also, if you are using any of the iWork apps on your iPad like Pages, Keynote or Numbers, they have a few nifty finger swipes you can use to move one character, one word or even several words to the left or right. You can read about it here:

Scroll down to the section that says Swipe to move the insertion point through text.

And if you really want Apple to include those arrow keys in a future version of iOS, then you can always send them feedback and let them know! The more people that write to them about that, the more likely it’ll come to fruition!

How to Backup iPhone to iTunes and iCloud

How To Fix An iPhone Stuck In a Continuous Boot Loop

How To Block Unauthorized App Store Purchases Under Your Account